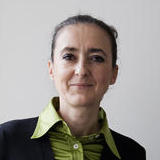 Following her studies at the Swiss Federal Institute of Technology in Zurich (ETHZ), in 1993 Pia Durisch founded the Durisch + Nolli architecture studio with Aldo Nolli. From 1996 to 1998 she was Professor Peter Zumthor’s assistant at the Mendrisio Architecture Academy. Since the year 2000 Pia Durisch has taught at the University of Illinois (UIUC) and delivered numerous lectures at the Illinois Institute of Technology, the Swiss Federal Institute of Technology in Zurich and the Mendrisio Architecture Academy. In 2006 she was a guest lecturer at the IUAV University of Venice and between 2011 and 2013 at the École Polytechnique Fédérale de Lausanne (EPFL). Durisch + Nolli’s notable designs include the Swisscom Service Center in Giubiasco, the Teatro Sociale in Bellinzona and the m.a.x.Museum and Spazio Officina in Chiasso, for which the architects won the first SIA Ticino prize for best public building.