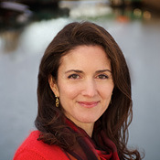 Susannah Churchill Drake FASLA, RLA, AIA, RA was born in 1965 in Cambridge, England and raised in Norwich, Vermont. She completed her bachelor’s degree in Art History and Fine Arts at Dartmouth College and her Master’s degrees in Architecture and Landscape Architecture at the Harvard University Graduate School of Design. Since 2005, she has taught at Harvard, IIT, FIU, CCNY, Syracuse University, Washington University in St. Louis, and The Cooper Union.

Susannah is the founding principal of DLANDstudio Architecture and Landscape Architecture. The firm is the winner of national and international urban design awards from the AIA, ASLA, and Chicago Athenaeum, among others, and it’s Rising Currents, New Urban Ground project for Lower Manhattan is in the Permanent Collection of the Museum of Modern Art and Cooper Hewitt. Susannah was winner of the 2014 New Practices New York award from the AIA. In 2013 she was awarded the AIA Young Architects Award, Fellowship in the ASLA, and the firm was recognized as an Emerging Voice by the Architectural League of New York. She is also the recipient of grants from the Graham Foundation, New England Interstate Water Pollution Control Commission, Environmental Facilities Corporation, NOAA, EPA, The James Marston Fitch Foundation, and the New York State Council on the Arts for research on campus landscapes and large-scale urban infrastructure projects.

Her work and writings have appeared in the New York Times, National Geographic, Metropolis, Dwell, and Topos. Her essay WPA 2.0: Beauty, Economics, and Politics in the Creation of Public Infrastructure was included as a chapter in Nature and Cities (2016), edited by Frederick Steiner and published by the Lincoln Land Institute. Books include Demopolis (2016), Under the Elevated (2015), and Arkitektur Urbanismus (2013). She lives and works in Brooklyn, New York with her three children and mini dachshund.